Jerry Robertson grew up in a family that listened to nearly all forms of music, from his grandfather’s love of Classical, his mother’s affinity for Big Band, to his Southern Dad’s leanings toward country and bluegrass.  Jerry absorbed all of this but always went back to his 45s of Elvis, Little Richard, and Ray Charles, and later The Beatles and Bob Dylan.

A high school friend introduced him to the music of Fred Neil and Paul Butterfield, which to this day he traces most of his musical leanings to.  Today, his collection of LPs, 45s and CDs number in the thousands, and he’s happy to share them with you on “Against The Grain.”

While Jerry’s playlists lean toward Americana music, you’re likely to hear blues, soul, bluegrass, and country.  As Jerry says, “if it was recorded in Muscle Shoals, Nashville, or Chicago, it’s Americana to me! For several years he would have his brother and friends in his house on Wednesday evenings just to share music and a little wine.  Now he is able to share his knowledge of music with a wide audience through his association with WICN.  You must provide your own wine, of course. 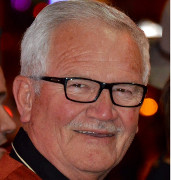 I was brought in to the station by Rick McCarthy. He would hear all of the music I played at the Leicester Post Office every day and thought of me when Nick DiBiasio had to step down. So, it’s all Rick’s fault!

Having the Six String Soldiers do a special concert in the studio for me was absolutely my best memory!

Best Concert I ever saw: SO many, but a standout for me is Roger McGuinn, Gene Clark, Marty Stuart and his Fabulous Superlatives performance of “Sweetheart of the Rodeo” 50th anniversary show. k d lang at The Ryman, Rosanne Cash and Ry Cooder doing Johnny Cash, Richard Thompson every show, on and on and on…

I was the Postmaster of Leicester for the last 18 years of my 30-year career. Great career.