Marty Ayotte has been in radio since 1984, starting at KTEK (1110 AM Alvin TX) Christian radio in Houston Texas in 1984, with duties selling advertising and running prerecorded Sunday morning church services.

“I moved back to Worcester in 1988, and in 1995 started assisting Markis Edmunds at WCUW on Blues Hit Big Town. I coordinated phone interviews, chauffeured visiting musicians from airports to venues, and coordinated events at WCUW and outside venues.

Markis left WCUW in 1998 and I took over the show. In 2006 I moved to Gray Maine to expand my ski racing career. While there I started volunteering at WMPG in Portland. I was on the Board of Directors in 2008. In 2009 I moved back to Worcester and went back to blues programming at WCUW. In 2015 I took over the weekly Wednesday morning Crosstracks show and named it Hepcats Hillbillies and Rock n Roll, a rockabilly program with the tagline “Truck drivin’, Beer drinkin’, Train kinda songs.” In addition to my on-air work, I continued to present live acts and fundraising events for WCUW.

In 2020 the COVID outbreak made me consider other options. I built a home recording studio and decided to produce my shows at home. I continued to record shows and they can be found on my Mixcloud channel Mass Max Music and WURN. I pitched Hepcats Hillbillies and Rock n Roll to a few rockabilly outlets and Rockabilly Radio in London UK asked if I would send them a sample. Dave Brighton liked the product and I’ve been sending a weekly show there since January 2021.

I’ve been doing a reading show at Audio Journal since 2004. It is a program about sports for blind, visually impaired, or disabled persons called AJ Sports Page. I left in 2006 but returned in 2009 to the present. Radio is in my blood!

I am also an active musician in two working ensembles. I play harp in both country and blues styles and do hand percussion. I’ve sat in at Layla’s on lower Broadway and The Bourbon Street Blues and Boogie Bar on Printers Alley in Nashville and W.C. Handys on Beale in Memphis. I am currently under the tutelage of Dan Gabel at the Joy of Music Program studying euphonium. I’ve also studied trumpet under Jerry Sabatini. I facilitate a weekly ukulele group. In sports, I have 17 medals (4 golds) in sit skiing. I’ve also completed 12 marathons on handcycle including NYC 2011 (2:30:59).” 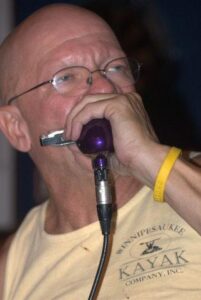