Born in Rockville Centre, NY and raised in northern New Jersey, Vince has been a New England resident since 1976. He was named after his extremely inventive grandfather, who had no knowledge of, nor connection to, American football, although Vince loves the sport.

Following a career in printing and publishing, he became involved in voice work. He has recently retired as the Executive Director of Audio Journal, a nonprofit broadcast service for residents of Worcester County who are blind. A lifelong lover of all the arts, his concentration has been in radio and theatre. He has received awards for producing, hosting, and voice talent for several productions. He is also a professional audio describer for live theatre and other performances and produces and narrates audio tours of museums, art exhibitions and historical architecture. He is a member of the Worcester Art Museum, ArtsWorcester, and works with the City of Worcester’s Commission on Disability.

Vince began volunteering at WICN in 1996 as a substitute jazz host. He presently hosts Standard Time, 3-6 PM on Thursdays. 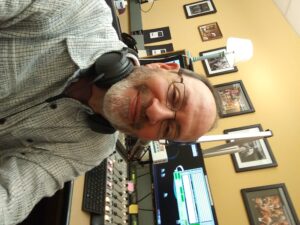 Having moved to the Worcester area in the mid-70s from the jazz-rich Patterson, NJ area, WICN answered my question, “Where’s the jazz?” After some 20 years, I had the opportunity to volunteer and subbed frequently. That led to a nearly 4-year gig as host of “A Tasteful Blend” and now it is my weekly pleasure to share this wonderful art form on the Thursday edition of “Standard Time.” Directing the activities of Audio Journal, a radio service for individuals who are blind, gave me the confidence to volunteer in the first place. My love of jazz and exploring its depths – and hearing from kindred souls – makes being on air a real pleasure.

Hearing that jazz fans Carl Cooper, Peggy Allen and Bunny Price would call each other to make sure they had on WICN “cuz Vince is playing that bad music again.” My other favorite memory is whenever Ed leaves…Enjoying laughs & musical notes with other jazz lovers.

Not a big concert guy. I prefer jazz music in clubs. Newport Jazz is always a joy. Al Jarreau put on a great show. Luther Vandross lit it up. Pink Martini is an amazing group to see, incredible talent and diversity.

As mentioned, I served as Executive Director of the radio service Audio Journal for over 20 years. I am an audio describer for live theatre, museum exhibits, and a great variety of live events. I worked in printing and publishing for many years.

That’s like asking “Which kid is your favorite?” Everyone from Armstrong to Zappa. Jobim, Berlin, Porter, the Gershwins, come to mind immediately – but so, so many to include. Miles, Coltrane, “Kind of Blue,” Sinatra & Jobim together ranks up there too.