What brought you to hosting a show on WICN? Why do you love being on the air?
I’m a lifelong lover of radio and always imagined myself putting together playlists and spinning tracks. In college (1969-73), I had a prime-time (i.e. 10 PM – 2 AM) “progressive music” show on WESU, 88.1 on your dial from Middletown CT, on which I played a lot of jazz, and was Program Director my senior year. Much as I loved radio, I realized there was no way I’d ever make a living at it.

Fast-forward about 40 years; I had been on WICN’s Board for several years and started subbing now and then on shows like Sunday Jazz Brunch and Soul Serenade.  About 6 years ago, I started doing a weekly afternoon show, which became “Standard Time” – so grateful to Brian Barlow and Joe Zupan for the concept, and the example they set!

I really love continuing to discover great music old and new, and to work on fresh ways of putting it together and adding context for our listeners. Generally, I build each show around themes relating to that week – birthdays, commemorations, new releases – and I always find tracks that I’m really enthused about bringing to WICN’s listeners.

What is your favorite WICN memory?
I treasure the time I was able to spend with the late Joe Zupan during his last couple of years on the air. He knew and loved the music so well, was smooth as silk on the air, and had a real way with people: the many artists who loved to come by or call in – and often perform – and he had stories to tell! Especially when I served as Interim General Manager, I was able to get know a little bit some of the remarkable voices and characters of WICN: Mark Lynch, Joe Slezik, Jon Marable, Ed Gardella, Michelle, Brian, Tom Shaker… I could go on.

FILL IN THE BLANK: The best concert I ever saw was ______________?)
I’m going to cop out and say I don’t have ONE favorite. Most that come to mind, I’d have to qualify with “you had to be there” with my weird taste. I will say I’ve been on the scene for many memorable performances in WICN’s own Studio 50. When it opened in 2005, Joe Zupan set up many live shows. I worked just upstairs at that time, and would sneak down when I could. One that was fantastic was Catherine Russell with her band. She’s a terrific performer, and that day I was a live audience of one. I also came down for 12-year-old Grace Kelly. I was fine after they scraped my jaw off the floor! Some of the Jazz New England shows that Pamela Hines produced In 2016 were really outstanding. I can’t wait for the relaunch of Studio 50 for performances this year!

Many listeners don’t know that the majority of our hosts are volunteers that do this out of a personal passion. What do you/did you do professionally off the air?
I first got involved with WICN on a business level. I came to Worcester in 2001 as CFO of Davis Publications, which owns the Printers Building. One day I was in my office on the third floor and went out to see who had just walked in; it was Brian Barlow, who said he’d heard we had some space to rent on the first floor. We sure did, and in 2004 WICN moved into 50 Portland Street. As my job backed off in the Great Recession, I was very involved on WICN’s Board, through some challenging times – and ended up Interim General Manager, twice: once for a few months in 2011 and then for two years from 2015-2017. Somehow the station survived me.

Seriously, I had started my professional career in book publishing, left to be a financial analyst/manager in the corporate world, and came back to publishing at Davis. Now, I also am part of a marvelous organization called the Ignatian Volunteer Corps. For the past several years through IVC, I have done fundraising etc. work for Matthew 25, a remarkable low-income housing agency in Worcester.

Also, I’ve played saxophone since high school: in a Battle-of-the-Bands state finalist blues band, free jazz in college, small groups in Chicago, and for the last 25 years in a big band and concert band. I’m on baritone mostly now, but started on tenor. During this pandemic, I “woodshedded” on some lessons with our WICN colleague Noah Preminger, which were pretty mind-blowing.

Who are your favorite artists and/or albums of all time?
It’s like picking one’s favorite children! On Facebook a while ago, I did one of those “post your ten favorite albums” things. Among them: Sonny Rollins, Saxophone Colossus; Ella Fitzgerald Sings the Cole Porter Songbook; Art Blakey, Free for All; Clifford Jordan, In the World; Love, Forever Changes; Murray Perahia (piano), Schubert Impromptus; Mingus Mingus Mingus; Nino Rota, Tutti I Film de Fellini; Otis Redding, Live in Europe. An odd list maybe, but these are records that meant a lot at one time in my life, and still do. I have the well-worn vinyl to prove it! 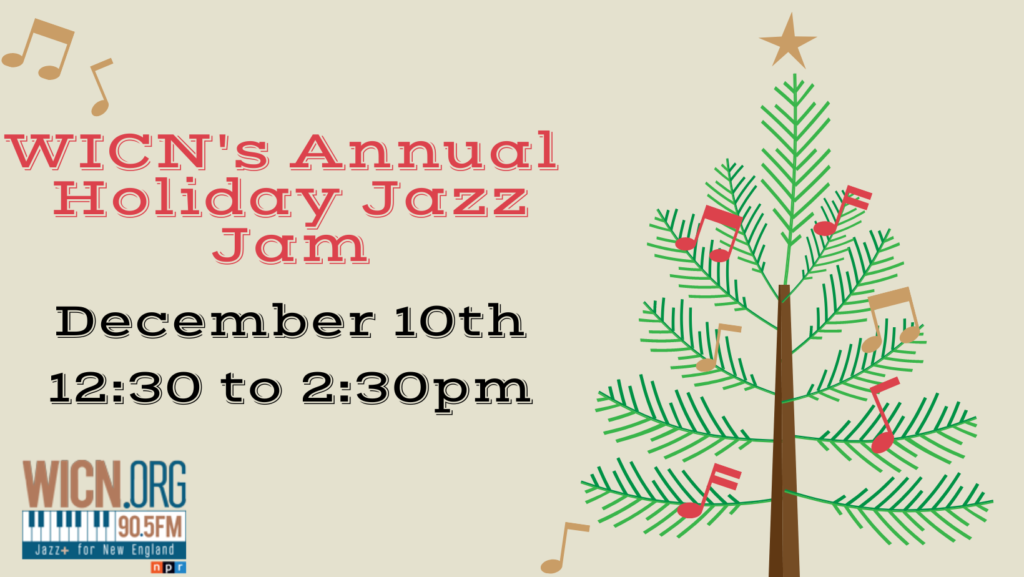